A Guide to Retirement Age Around Europe [study]

The Live in Care Company take a closer look at the retirement age across Europe and compare it to the UK in this new study.

Speak to one of our experts

Our friendly experts are here to help from 9am to 7pm, 7 days a week.

With fantastic progression in society’s living standards and healthcare improvements over the last few decades, average life expectancy across Europe has generally been rising. This positive development has resulted in an inevitable increase in the number of people in retirement. However, as the retirement population grows, the tax burden for those who are working increases, raising the question – should workers pay higher taxes for those in retirement, or should tax be lowered and the age of retirement increased?

Whether it’s questions over taxation, ageing or health, the challenges raised by retirement policies have been testing UK politicians for years, but how does our nation compare to other countries across Europe when it comes to retirement, and is there anything we can learn?

We have conducted a retirement study across 28 European countries to answer three key questions: 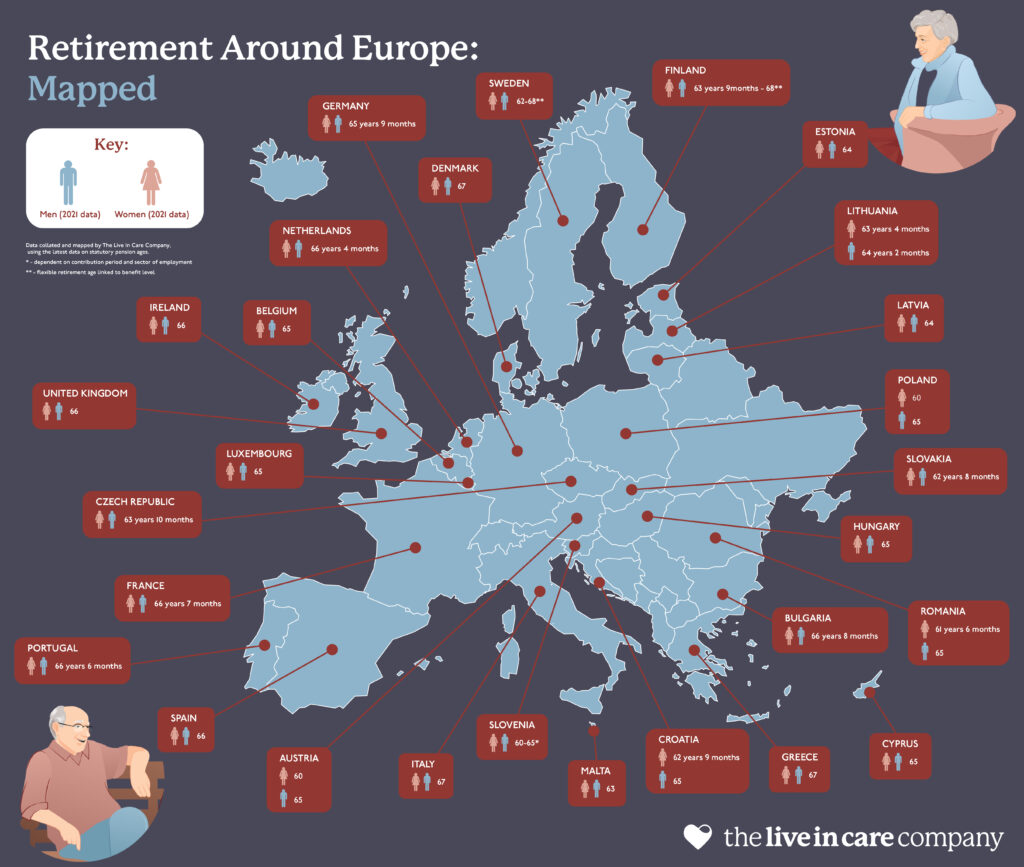 How does the UK fare against the rest of Europe?

In comparison to the major EU countries with comparable economies, the UK has the most rapidly increasing retirement age.  The increase has been from 62 years and 6 months to age 66 in just 11 years which means that UK citizens will soon be working longer than any other nation in the EU at the current rate of increase.

Luca Rado, director of The Live In Care Company, explains what this could mean for UK citizens far away from retirement:

“At the current rate, workers in their twenties and early thirties could be seeing retirement as far away as their mid to late seventies. Long gone are the days of retiring early on a state pension; this is already starting to halt, and in a decade or so, it might not even be a realistic option in the UK.

In terms of the economy, keeping people in work longer will increase tax revenues, and as older people typically require similar amounts of healthcare regardless of when they retire, stopping work earlier in life likely won’t reduce government healthcare costs. However, in addition to the obvious quality of life improvements, there are other economic benefits to an early retirement which our government should consider. According to the International Longevity Centre (ILC), retirees add billions to the UK economy, while spending by younger people has been falling in recent years. With retirees enjoying more free time, this spending is happening right across the economy, but  particularly for vital sectors like transport and recreation and culture.“

How progressive is each country at adapting retirement to changing lifestyles?

Our analysis shows that several Scandinavian countries have not changed their retirement age at all for the last decade. However, these countries initially had a far higher retirement age than that of the average EU nation, so the real test will be over the next decade to see if they keep these ages stable.

Luca Rado on the value of constant retirement age:

“By having a high retirement age that remains constant such as Denmark’s, as opposed to an initially lower retirement age that is increasing rapidly such as the UK’s, it allows citizens to properly plan ahead. Knowing when retirement is to be expected can allow people to structure their lives more fully and in the long term.

By having a rapidly increasing retirement age, citizens can end up feeling somewhat downbeat and pessimistic about when they will actually retire; seeing a continually rising retirement age can therefore lead to a decrease in a nation’s GDP, happiness, and productivity.  It may also discourage voluntary pension contributions if people believe that they are unlikely to benefit in retirement from money that they invest in earlier life.

We have clients over a range of ages, but they all say the same thing: being able to plan ahead to retirement has helped them manage financially, and has made them feel far more settled entering the next stages of their lives, especially in terms of cost of care”

Which countries have the highest levels of retirement age equality?

The UK is amongst the top countries for retirement age equality, with men and women both able to claim a state pension at 66.

There are still five countries that have vastly different retirement ages for the different sexes, with Austria and Poland both requiring that men work five years longer than women.

Luca Rado on the equality between sexes:

“Retirement age equality undoubtedly has many benefits, however, the topic is much more complicated than it may initially seem. Men and women can face different challenges when it comes to work, so a set age for retirement may not benefit everyone. For instance, some studies suggest that women experience their peak earning potential during their 50s and 60s, whereas men’s earnings tend to decline during those years.

As a result, women may miss out on more wealth than their male counterparts by retiring at the same time or earlier than them. Given that women generally live longer than men, this can be particularly problematic during later retirement years. In fact, according to the National Institute on Retirement Security, ​​ women are 80% more likely than men to live in poverty after age 65. It remains to be seen what impact changing the retirement age will have on our society and whether or not this will have a positive impact on people’s overall well being.”

Retirement data was gathered from the Pensions: international comparisons report which can be found here. All data was correct at the time of publication.

Elderly Live-in Care at Christmas: How Does it Work?

Knowing When to Seek Help for an Older Relative

Speak to one of our experts

Our friendly experts are here to help from 9am to 7pm, 7 days a week.

To tailor your experience and help us provide the best service, we use cookies. Learn more